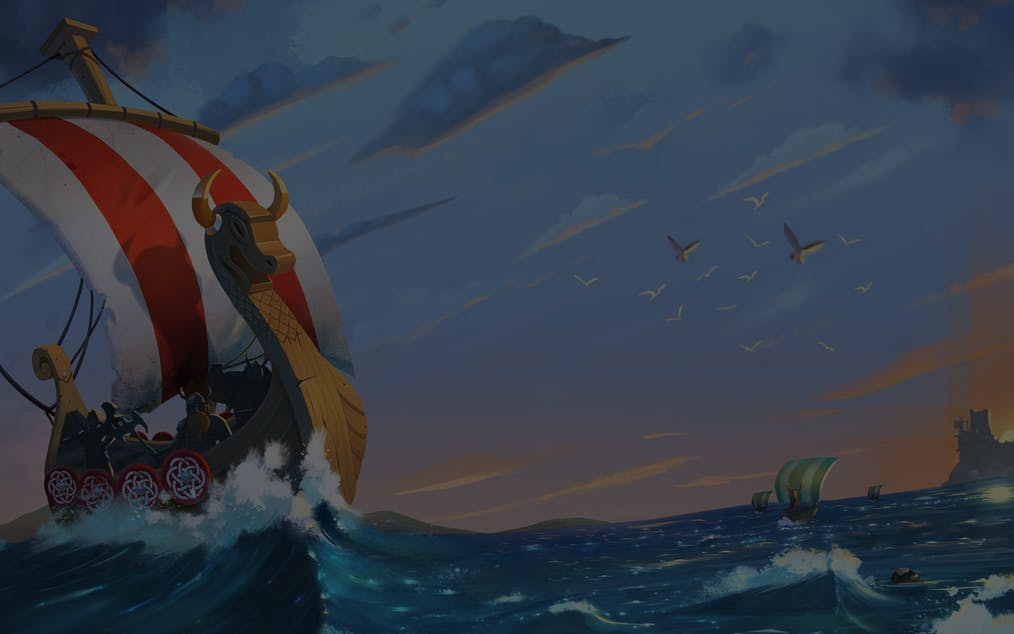 Follow the Vikings into the middle of the ocean in this casino slot Viking Clash. Get a shield or a ship to receive more prizes.

If you open the free game features, the red catapults launch Wilds on random parts of the other reel. The same can be said for the green cannon. You can also receive a random number of ships at erratic times in the game. If you continue spinning the reels, you can obtain up to 13,200x your stake if you land the biggest combinations.

The casino slot Viking Clash has a unique setup that uses two grids of 5 reels that provides 25 ways to win. You can play this game for a minimum bet of €0.25 up to €50 on your desktop, mobile and tablet.

You are provided with 11 symbols that you can use to land winning combinations. The different combinations possess various payouts that depend on the amount of your bet that also determines if the symbol is regular paying or high paying.

The regular paying symbols use rune stones and tools as its symbol. The rune stones have various meanings that coincide with a person’s quality. These are the symbols that appear on the reels more frequently. These are what you can receive at maximum bet:

Red and Green Catapults. If 3 or more of the catapults land anywhere on the reels the free games are triggered.

You can trigger this feature randomly after the present line wins are paid. When you have it activated, a wave will pass over the reels and a number of Wild Ships will appear.

You can trigger this feature by landing 3 or more of the red catapults or green cannons anywhere in the reels. For each red catapult that is present when the feature is triggered, a Wild Shield is launched onto random positions of the green reel set. For each green cannon that is present when the feature is triggered, Wild Shields are launched on any random position of the red reel set. If the Wild symbol is launched on an existing Wild symbol, a multiplier will be added to the existing symbol.

The casino slot Viking Clash is set in the middle of the ocean with a few Viking ships that are seen in the background. You can see a few Vikings that are peeking from the closest vessel, holding weapons and prepared to fight in defence of their ship. The bonus feature is programmed to launch random Wild symbols into the other reels.

The music scoring in the background uses a percussion-heavy piece that gets your adrenaline pumping. You can also hear people chanting at random times. This adds more excitement to your game experience.

The Conclusion of the Viking Clash

The casino slot Viking Clash has an easy to understand gameplay that you will definitely love. The reels are uniquely configured with two sets of reels that have designated colours. This adds another facet to how the slot game is played and enjoyed. The features are innovative and add more excitement to how you can obtain a win. You should not let this chance of winning bigger rewards pass by.

It’s time to Turn It Up for the Hockey Hero as he brings his Ultimate Dream Team into victory. Receive more rewards and enjoy more games from Push Gaming’s large library of game titles that you will certainly have a blast playing.