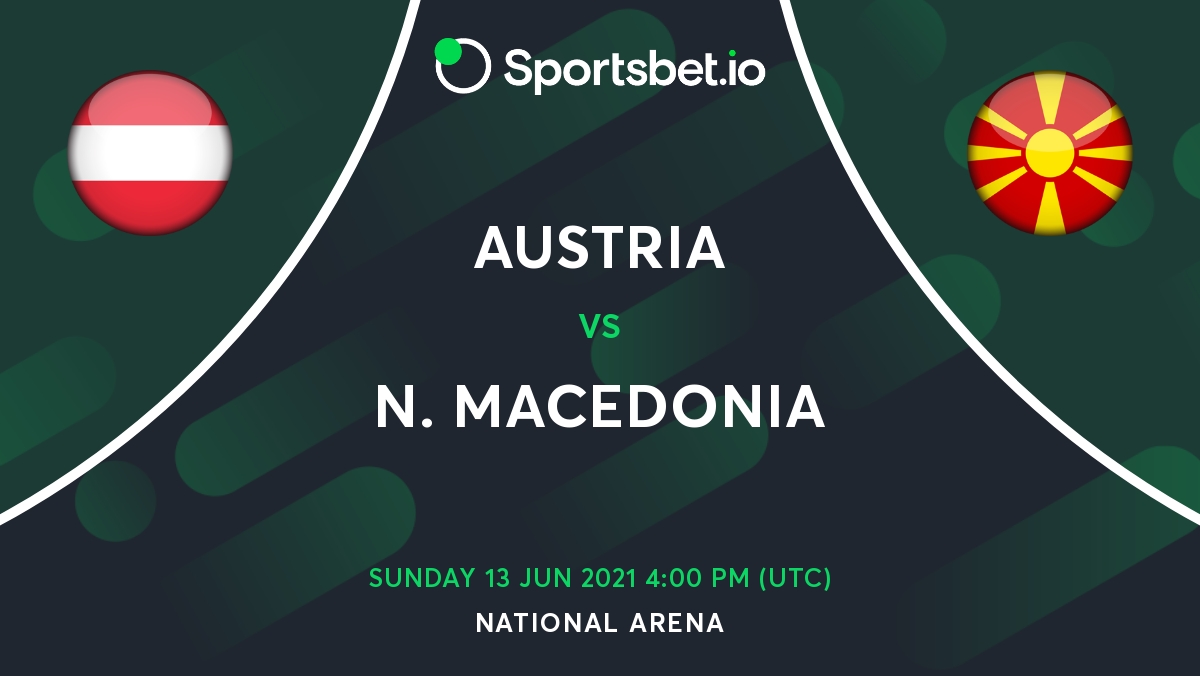 The game will be played this Sunday at 4:00pm GMT at the Arena Natională.

The European Championships are now well up and running, delivering on its promise to give us countless glorious displays of the beautiful game. On Sunday, we shift our gaze to Bucharest, as Austria take on North Macedonia. Whilst it looks likely these two teams may end up battling for a high placed 3rd position, given that Group C includes the Netherlands and Ukraine, this fantastic tournament can always bring surprise results.

The European championships first round will be important to see Austria and North Macedonian's performance and predict their possition into the end of the group stage. Right now the probability of scoring for both teams is high (46.08%), but we have to wait for Saturday to see it for ourselves.

Austrians On The Front Foot

Currently ranked 23rd, the Austrians arrive at the tournament having only one win in their last five games. They also suffered two losses and a draw, a form that is not dissimilar to their opponents.

It's the Austrians’ 3rd appearance at the European Championships and they are hopeful of reaching the knock-out stages for the first time. They’ve won plenty of games since the 2018 World Cup, but have also suffered defeats to the likes of Latvia and Romania, as well as a heavy 4-0 defeat at home to Denmark.

North Macedonia - Discount Them at Your Peril

Ranked 65th in the FIFA Standings, (the lowest rating in the competition), North Macedonia arrive at their first major tournament on the back of two wins, two losses and a draw. Like Finland, they are a team that are all too easy to write off. However, it must be acknowledged that they delivered a (2-1) win against Germany in qualification (their first qualification defeat in 20 years).

The North Macedonians will be without their talisman goal-scorer, Ilija Nestorovski, due to knee sur-gery and they will be reliant on the fantastic vision of veteran Striker, Goran Pandev. Despite being 37, after a 20th season in Italy, his creativity gives them an edge.

On the basis of Austria’s greater experience of this competition, it’s not surprising that they’re considered to have a (61.73%) chance of a win, with a draw at (27.03%). However, this is a fixture on a neutral ground, with both teams keen to make their point. Its also a tournament that never fails to deliver jaw dropping surprises and North Macedonia did beat Germany.

The Austrians go into the match having finished 2nd in their qualification group. They beat North Macedonia twice in qualification, finishing 2nd in the table, just ahead of them in the group. The Aus-trians managed to score six over the two games, with two in reply. The two sides had never met before in qualification.

As this is the first time they are going to face each other, it is a fantastic opportunity to see which team scores first. Could it be the Austrians? Will it be North Macedonia? Right now the odds are in Austria's favor (69.44%), with a high chance of scoring at least one goal (37.17%) They are not that good for North Macedonia, who might not score any goals at the end of the game.

The Austrians have one of the most experienced and versatile players in the competition, in David Alaba, whilst the mercurial talents of Marko Arnautovic are always likely to cause a stir. One to watch for North Macedonia, is Ezgjan Alioski, an important figure for Leeds United.