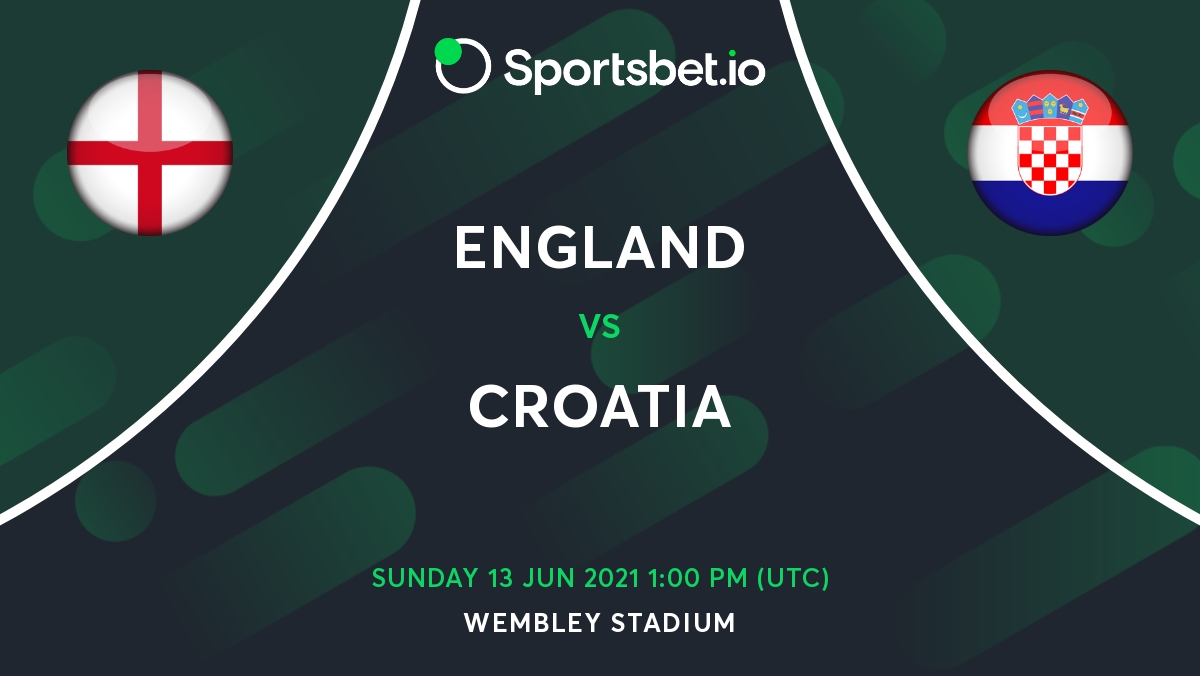 The game will be played this Sunday at 1:00pm GMT at the Wembley Stadium.

Next Sunday at 1:00pm GMT, on matchday 1 of the European Championship, we will see England play Croatia at Wembley Stadium.

It’s their second meeting at the European Championships, England’s 10th appearance in the finals and Croatia’s 6th. Both sides are considered likely to get through Group D, which also includes Scotland and the Czech Republic.

With the statistics of both teams we expect an electric match with goals in both squads. That is the certain possibility, with a 50.50% of both teams scoring in this first round of the European Championships.

England With Weight of Expectation

England are considered joint tournament favourites with France, with five wins from their last five matches. It’s a young squad, littered with Champions League experience, who reached the World Cup Semi Final in 2018, losing against Croatia. Coach, Gareth Southgate believes these big-game experiences help the side not feel the weight of the shirt.

Southgate’s 3 Lions have an wealth of attacking flair, a talented mid-field and flying wingers. Tour-nament winners though need a strong defence, which may be why the squad with options in that area. They do have injury concerns for some key players in defensive areas, which is a concern.

As the probabilities of goals are high, it does not seem easy for the English to leave the game with zero goals conceded. The attacking ability of their rivals puts them on the ropes, with a high possibility of conceding goals in the match (69.44%).

Croatia Know The Way to Victory

Croatia were Finalists in the World Cup in 2018, having beaten England. Their record against the 3 Lions at Wembley is (W1,D1,L2), so a result here is possible. Coming into the competition though, they’ve had two losses, two wins and one defeat in their last five games. However, they finished above Portugal in qualification.

It’s possible that Croatia’s golden generation has missed its greatest chance in a major tournament, having lost in the 2018 World Cup Final. However, they still have a lot of experienced players. Luka Modric might be 35-years-old now, but continues to be a world class midfielder.

Similar situation in Croatia's squad, with the backbone of the English threatening to score. The probability of the Croatians of not finishing with zero goals conceded on the scoreline is very high as well (93.45%), considering they travel to the mythical Wembley Stadium in London, but we will have to wait until the end of the match to know the result.

England have never won on Match-day one, whilst Croatia are still to taste defeat, winning their last three opening fixtures. It’s the second time the teams have met at the European Championship and results have been varied. However, with Wembley hosting the big matches at the back end of the competition, their motivation to win here will be great. It’s considered (57.14%) likely that this will be an England Victory, with a draw at (28.57%).

These two have met in many high stakes matches recently, so both sides know the format. It’s a tale of back and forth in terms of success, England’s young attack up against Croatia’s old heads. Croatia lead the stats though, with two wins and seven goals, compared to England’s one win and six goals.

It seems that we expect a spectacle of goals by both teams, but who will be the lucky one to open the scoring? The statistics suggest that it will be England in first place (37.73%), with a possibility of scoring between one and two goals in the match. Let's see what happens!

England’s Captain, Harry Kane was the 2018 World Cup Golden Boot winner and is their talisman in attack. Their strength is as an offensive unit, but one to watch is Dortmund Mid-fielder Jude Bel-lingham, who if England qualify, will be 18 on the day of a last 16 tie at Wembley. Croatian, Luka Modric remains a force in mid-field, whilst Andrej Kramaric enjoyed an excellent season at Hoffenheim.