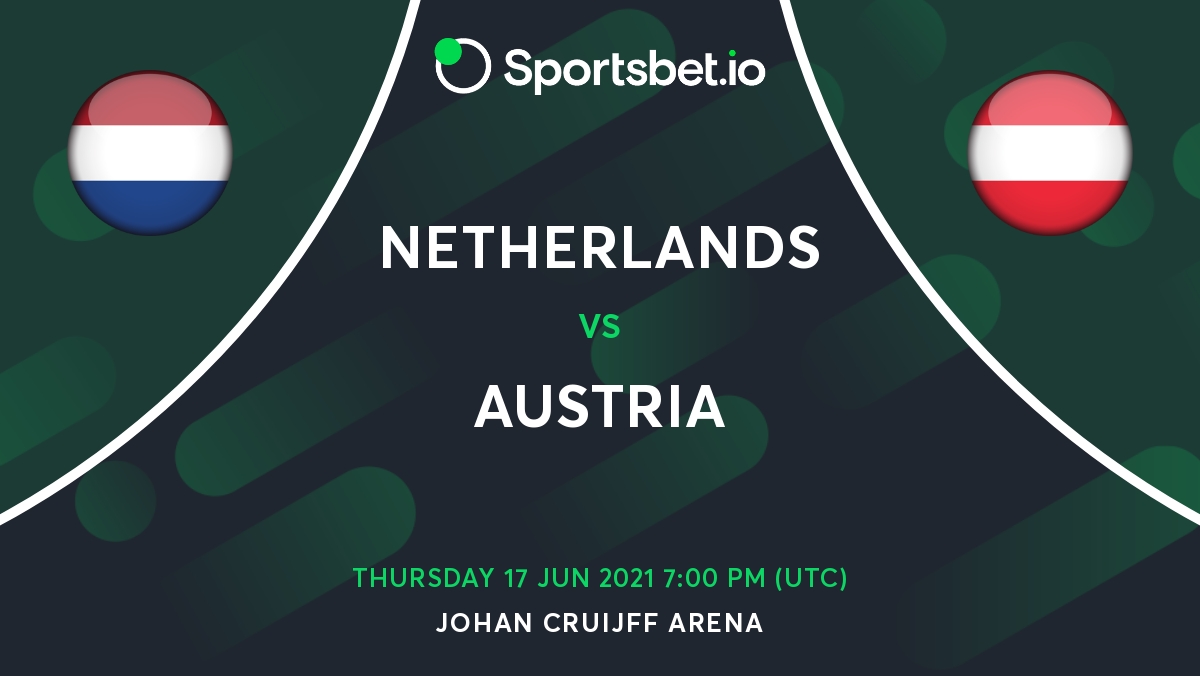 The game will be played this Thursday at 7:00pm GMT at the Johan Cruyff Arena.

The Netherlands welcome Austria to Amsterdam on Thursday and both sides are in good form having put in winning performances at the weekend to kick-off their Euro 2020 campaigns. Austria were too good for North Macedonia in Bucharest, running out 3-1 winners, while the Dutch edged out Ukraine in a five-goal Amsterdam thriller thanks to a late Denzel Dumfries winner.

Thursday’s match will be the first competitive match between this pair since 2003 and both sides know that a victory will secure their place in the last 16.

The Dutch were in cruise control over Ukraine, leading 2-0 with less than twenty minutes to go before they were hit by a quick-fire double to see them pegged back to 2-2.

Denzel Dumfries may have fired in a late winner but it once again showed that the Netherlands are struggling for consistency against better quality sides and this will be a major concern for boss Frank de Boer and the Dutch fans.

They will be hopeful of taking the points in Amsterdam though, having won the last six matches against Austria and the Dutch have a 68.96% chance of opening the scoring on Thursday.

Games between the Netherlands and Austria historically see goals scored - a staggering 30 goals were scored in the last seven games alone and it’s rated at 54.64% that both sides get on the scoresheet on Thursday.

The Austrians were touted as dark horses at Euro 2016 but flopped and took just a single point from their three group matches but they arrive at this tournament under the radar and with an experienced squad.

They dominated North Macedonia on Sunday, turning their 63% possession into three well-worked goals and they will fancy their chances against an erratic Dutch side.

Sunday’s victory over North Macedonia was the second time in four matches that the Austrians have scored three goals but it’s only a 7.28% likelihood that they will score 3 or more goals against the Dutch on Thursday.

The Netherlands are strong favourites to take the victory on Thursday - the home win is rated at 60.98%, a result that would see the Dutch through to the last 16. An Austrian win is at 18.52% while the draw, which would suit both sides, is a 25.32% chance.

These countries have played each other 18 times previously - the Dutch have won eight, Austria won six, and four matches ended in a draw. In recent times, the Netherlands have been in the ascendency, winning the last six clashes including a 2-0 friendly victory in Vienna in 2016. Another Dutch win to nil on Thursday is rated at 40.00%.

He may not have got on the scoresheet against Ukraine but Memphis Depay has been in fine form this season, scoring 20 goals for Lyon and five goals for his country since March. Depay will be hopeful of adding to his tally against an Austrian side that’s managed just one clean sheet in their last eight matches.

Austria will look to Saša Kalajdžić to provide their main attacking threat in Amsterdam with the 2 metre tall striker arriving at Euro 2020 on the back of scoring 16 goals in 32 appearances for the newly promoted Stuttgart in the Bundesliga.

Flamengo loses in a massive upset against GrêmioFlamengo just lost a key match on Matchweek 21 to bottom feeders Grêmio. This is a massive loss for Flamengo since they want to compete for the title. With this result, Flamengo slid to third place behind Palmeiras and league leaders Atlético Mineiro.
Ferdinand heaps praise on RudigerFormer star Rio Ferdinand has a lot of praise on Chelsea star Antonio Rudiger for his performance in the past few years. Rudiger has sparked his role as the best centre-back in the Prem ever since Thomas Tuchel came for the team in the 2020-21 season.
Betis draws tight game with Espanyol, 2-2Real Betis came up short in their tight draw with Espanyol as both sides scored two goals each. It was a late comeback by Espanyol that fueled the draw, and it was a shock for many fans as they saw Betis being up 2-1 late in the game before they lost the lead.
Luan Peres believes Marseille can become Ligue 1 champsMarseille is second in the Ligue 1 table. With a good record, Luan Peres believes he and the rest of the squad can pull off an upset in the 2021-22 season. Lille managed to beat Paris SG in the 2020-21 season and Marseille wants to do the same.
Why Lingard’s comeback game shows his valueAfter Jesse Lingard’s blunder in their game against the Young Boys, the star bounced back in their 2-1 win versus West Ham. He waited for his chance and proved that he can still be the best player that Manchester United can rely on when it comes to scoring clutch goals.
Why re-signing Leon Goretzka is huge for Bayern MunichBayern Munich just announced they re-signed midfielder Leon Goretzka to a contract extension up to 2026. Goretzka’s previous deal was due to expire in the summer of 2022 which is why it was important to re-sign him now. Let’s dive into why this is huge for the Bavarians.
Why Paris SG stays in hot formParis SG is yet to take a beating from any team in the Ligue 1 for the 2021-22 season. The club has sat at the top of the league table since day one and they have shown no signs of slowing down.
Vini, Benzema shine in Madrid's 2-1 winMadrid’s scoring duo of Vinicius Junior and Karim Benzema struck once again as they led the way for the club’s 2-1 win against Valencia. The Blancos go up top in the La Liga table as they have now won four of the last five games in the 2021-22 season.
Rodrygo comments on his winning play versus InterMadrid started strong in their Champions League run with a 1-0 victory against Inter Milan. Rodrygo nailed the winner for the club and was pleased to help the team. He says he enjoys those big moments and wants more action as well.
Lens ends a 15-year winless drought by beating Lille 1-0Bitter rivals Lens and Lille played against each other on Matchweek 6. The defending champs struggled as Lens won the match 1-0 after a Przemysław Frankowski goal in the 74th minute. It was an explosive performance by the Lens squad as their fans showed their joy for the win.