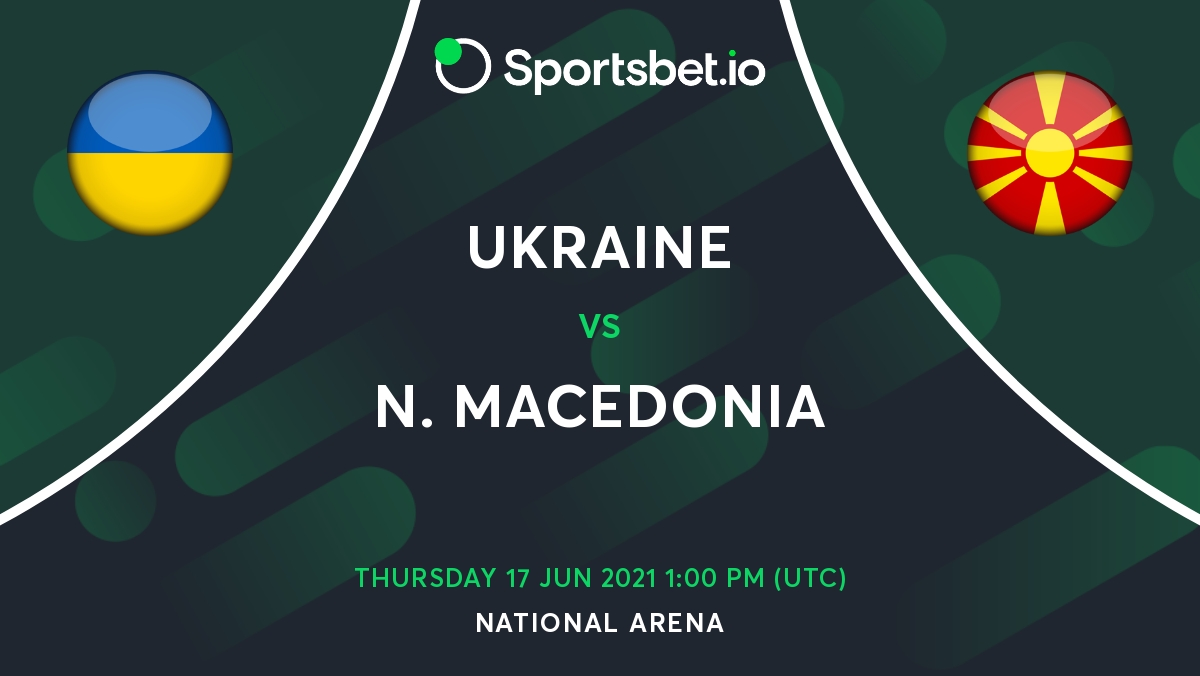 The game will be played this Thursday at 1:00pm GMT at the Arena Natională.

It’s an Eastern European battle in Bucharest on Thursday as Ukraine and North Macedonia clash in Group B. After both sides lost their opening matches, you can be sure that they will be going all out for an important win to keep alive their dreams of a last 16 spot.

Ukraine Look To Get Back To Winning Ways

Sunday’s 3-2 defeat against the Netherlands was Ukraine’s first loss of 2021, after a run that saw them undefeated in six matches. Coach Andriy Shevchenko will be aiming for a return to winning form from his side on Thursday though as they look to bank a vital three points.

Ukraine were undefeated in qualifying for Euro 2020, winning six and drawing two of their eight matches - recording five clean sheets in the process. It’s a 45.24% chance that they’ll win to nil in Bucharest on Thursday.

They may have lost to Austria on Sunday but that was North Macedonia’s first defeat in five matches, including a stunning World Cup qualifying victory over Germany in Duisburg.

It may seem a tough ask against a decent-looking Ukraine side but if they can perform to the level of their win over Germany, they could provide a shock and it’s a 31.34% chance that they open the scoring in Bucharest.

North Macedonia have scored 15 goals in their last nine matches but the likelihood of them scoring 3 or more goals against Ukraine is only 4.25%.

Ukraine are the favourites to take the win in Bucharest - rated at 61.73% for success - in contrast, North Macedonia are rated at only 16.13% to take the three points. The likelihood of the match ending in a draw is 27.40%.

These countries have met only four times previously and their last meeting was in October 2015. Ukraine have won twice, North Macedonia won once, and one match was drawn. North Macedonia’s only success was in 2014 when they ran out 1-0 winners in Skopje - the likelihood of them winning to nil again on Thursday is 15.01%.

Andriy Yarmolenko got on the scoresheet against the Netherlands and the West Ham player has now scored 41 goals for Ukraine leaving only Andriy Shevchenko in front of him in his country’s all-time scoring charts.

North Macedonia have relied on veteran striker Goran Pandev in recent months but Elif Elmas has proven to also be a potent attacking threat. The 21-year-old Napoli winger has now scored seven goals for his country - including three in his last five appearances - he’s a player that Ukraine will need to keep a very close eye on.

Why Hernanes' farewell means so much to São Paulo fansVeteran midfielder Hernanes just finished up his third stint with São Paulo recently. He ends his time with the club as a bonafide legend throughout his career. He grew up in the São Paulo system and he proudly represented the club for a cumulative decade.
Carson happy to work with GuardiolaManchester City has agreed to ink a deal with Scott Carson for one year and he is back for more after two years of action with the club. Scott is keen to prove that he thrives with the champs and that he is still a lethal keeper.
Why Simone Inzaghi will be a good coach for Inter MilanWith Antonio Conte leaving the team, Inter Milan signed Simone Inzaghi as the new head coach. There are doubters but Inzaghi has the potential to be a great coach with Inter, based on the flashes of brilliance that he showed with Lazio over the past decade.
How will signing José Mourinho work out for AS Roma?José Mourinho has found his new home with AS Roma in Serie A. With his lacklustre run with Tottenham Hotspur, expectations are lower than ever for the legendary coach. He wants to establish a new culture with Roma but the fans have questioned his coaching acumen.
Andros Townsend is set for a move to Everton after Palace exitAndros Townsend’s five-year stint with Crystal Palace has come to an end which has led to speculations about his new home. Everton is the 30-year-old’s landing spot after mutually agreeing to a deal with a medical examination forthcoming.
Why keepers are good picks for ArsenalArsenal hopes to ink a deal with Sam Johnstone and Aaron Ramsdale. The club is said to be aiming for a talented backup keeper that could give them a chance to compete against top teams in the Prem next season.
Akwa United continue to fight for their NPFL title dreamsAkwa United’s dreams of winning their first NPFL title is still in play with their 61st point after their 1-1 draw with Rivers United. However, their opponents are only three points behind with Nasarawa United and Kano Pillars sitting with 58 points to their names.
Mat Ryan wants to win trophies with Real SociedadAussie goalkeeper Mathew Ryan is known for his time in the Premier League but he is now chasing glory in La Liga since he just signed with Real Sociedad. He is fluent in Spanish which will be important for La Real since he can adjust to the system seamlessly.
Ramos wants to win with Paris SGSergio Ramos is pleased to have the chance to play for Paris SG, and he is not content with just playing alone. The star wants to make sure that he gets a chance to win a title with the club.
Why Solskjaer is pleased with the Derby winCoach Ole Gunnar Solskjaer saw the best of his boys when Manchester United took home a 2-1 win in their game against Derby County. The team had a lot of good talents on board and the coach was glad to see them perform well ahead of the real big battle ahead.