Official Partner of
AMPM
To promotions 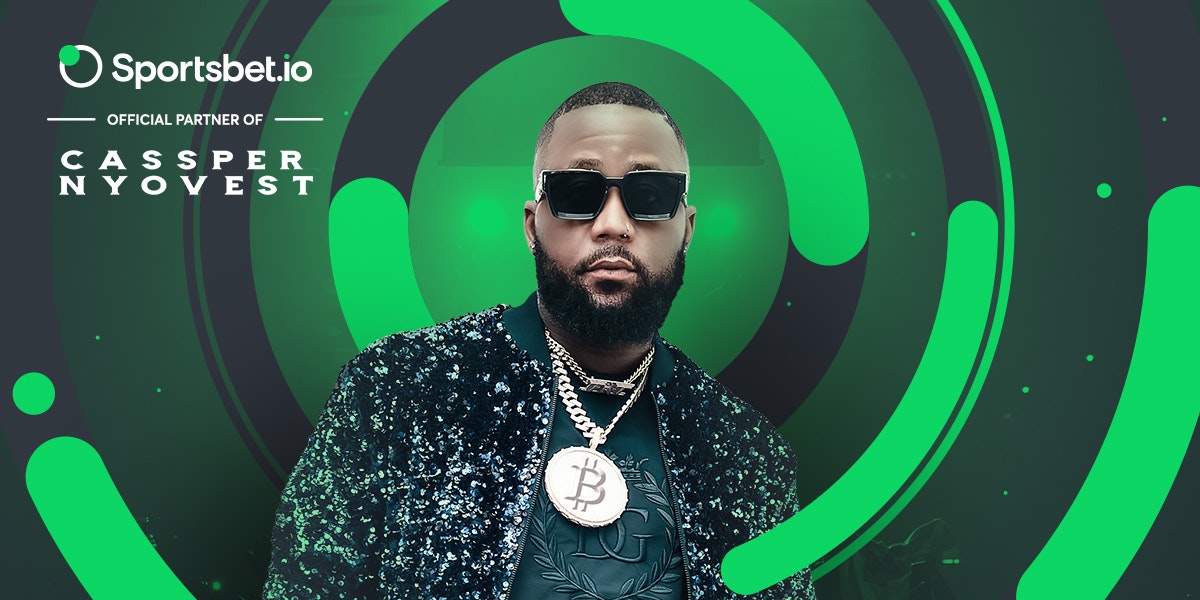 Sportsbet has done it once again by signing big names. Just like King Kaka and Tekno Miles, the amazing Cassper Nyovest has joined in on the mix of legendary artists who promote the wonders of sports betting.

As one of the top crypto sports betting sites in the world, Sportsbet has fortified its name by showcasing three of the music industry’s best who are all capable of more than just their musical prowesses.

More specifically, Cassper Nyovest went from music and hip hop to boxing which completely exemplifies what Sportsbet is all about. As a crypto sports betting site and online casino platform, Sportsbet aims to provide you with the best experience while having your best idols in music and sports along the ride.

In June 2022, Nyovest became one of the global ambassadors of Sportsbet who provided both great tracks and an entrepreneurial spirit that uplifted millions of fans. A hit song from his album Siyathandana had him sign an initial two-year deal.

‘I bet at Sportsbet.io not only because I can use crypto, but also because no other site treats its players better. I’m excited to work closely with the team to showcase the bonuses and promotions on offer. This is the start of something big’, Cassper said.

The perfect trio will undoubtedly build a long lasting relationship with Sportsbet and provide loyal punters with the best opportunity to enjoy a wonderful experience with the site.

Cassper Nyovest, a South African producer and songwriter, was born in 1990 as Refiloe Maele Phoolo. He excelled in sports and academics and began rapping at the age of 12. Hip Hop Pantsula (HHP), the Motswako rapper, saw his talent when Cassper was only 16 years old after he had been out of school for a few years.

A business connection was formed between the two. With this, Nyovest made a guest appearance on HHP's record and then accompanied him on tour thereafter. Nyovest spent the following several years performing all over the world as an opening act for some of the greatest hip hop artists while also working on content for his first solo album.

Tsholofelo, Nyovest's 2014 album, was such a smash success in South Africa that a bonus track-loaded Platinum Edition was issued the following year. Nyovest rose to stardom with the success of Tsholofelo, delivering sold-out gigs for ever bigger crowds and receiving several industry accolades. Thuto, his second full-length album, was released in May of 2021.

After releasing his most recent album, Any Minute Now, he worked with other popular singer-songwriters like Busiswa Gqulu, DJ Lemonka, and Samthing Soweto. Just like his other hit albums, Any Minute Now became an instant success, especially among South African fans.

During the South African Hip Hop Awards, Cassper won three awards namely the Song of the Year, Album of the Year, and Best Male Act award.

After having all these amazing accolades, Cassper decided to sideline his already illustrious career into sports. Probably one of the biggest sports in the world, boxing became his next big gig where he is slowly turning into a legendary boxer who came from the star lights.

In December 2021, he participated in a boxing event called Actor vs Musician where he competed against YouTube content creator Slik Talk and even won the match.

Other partnerships with big franchises

Not only is Sportsbet partnered with some of the biggest names in music, but they also have partners outside of that sphere like sports franchises. Here are a few who believe in Sportsbet’s vision and potential:

If you are a football fan, then you might have heard of this famous Premier League club who continuously dominated every season. Arsenal is a one of a kind franchise with some of the top players in the world. The partnership started during the start of the 2020/21 Premier League season and the club proudly wears its name in its football outfits.

Another amazing football club from the EPL joins Sportsbet. Southampton is a great football club that has one of the most talented football players in the world. The partnership started in the 2020/21 season.

The biggest club in the Brasileirão league also partnered with Sportsbet. Being one of the biggest clubs of Sportsbet, São Paulo seeks to garner a lot of fans to the site as they continue to dominate in the league for years to come.

Enjoy your favourite sports while crypto betting on Sportsbet!

Are you excited about the new signing of Cassper Nyovest? Together with King Kaka and Tekno, crypto sports betting at Sportsbet will become even more popular and interesting moving forward.

Check out the latest games and bet on in-play and outright matches at Sportsbet. With a user-friendly interface and a plethora of sports to bet on, Sportsbet will make you the punter you’re always deemed to be. Just remember to set a wagering limit to avoid losing a huge amount of money in the long run.

What are you waiting for? Start betting using crypto, win at Sportsbet, and have some of the best experiences of your life!