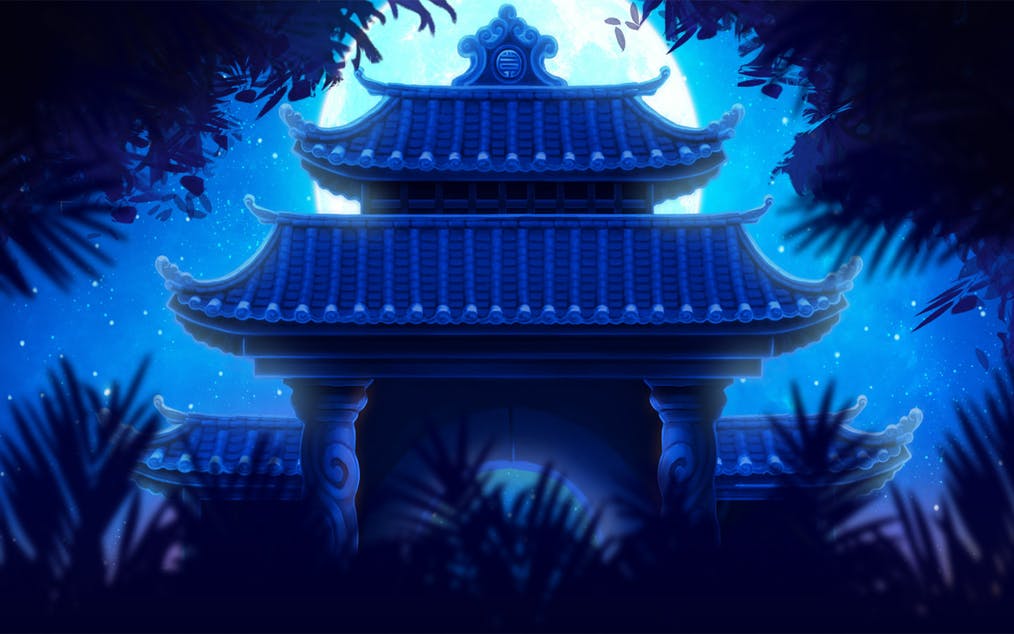 Calm your breath, sip some green tea, and enter the hidden temple garden. Let the quiet strings soothe you while you spin here in casino slot Golden Stripe!

Let the falling golden leaves and sounds of flowing water ease your stress away. Golden Stripes is here to for easy and uncomplicated playing with its single reel and 7-levelled progressive paytable. Get any golden symbol to progress to the next level for bigger payouts. Spin the reels now at 97.4% RTP and win up to 100,000 credits!

Casino slot Golden Stripe only has a single reel and one payline. The space between the pillars where two golden arrows point to is the payline. When you spin the reel, you can only land in three spaces: a regular symbol that pays, a golden symbol that advances the level, or a blank space that pays none and brings you back to level 1.

There are 5 regular symbols: a tiger, panda, turtle, frog, and a pair of koi fish. The 5 special symbols include the golden versions of the regular symbols.

Getting a golden symbol means progressing to the next level. Next level of the game translates to bigger payouts. Landing on a regular symbol is still a win, but with no level up.

You can see the symbols’ payout values on both sides of the reel with a golden bar on the lowest value. On every level up, the golden bar rises and changes the value placed on it.

However, once you land on an empty space, the paytable resets to the first level.

Check below the maximum bet payouts of each symbol:

Golden Stripe: Into the Sunset

Enter the tranquil garden at sundown in casino slot Golden Stripe. The blazing sun hides behind the red temple, casting the sky in deep magenta and orange hues. Golden leaves fall from the edge of the screen, caressing the wind softly as they fall to the grass. The solitary reel stands inside a small temple flanked by two tiger statues on each side.

The golden symbols complement the fiery skies while the vibrant colours of the regular symbols stand out against the dichromatic background. Strings played in slow tempo accentuate the Chinese theme even more. Sounds of flowing water calms and persuades you to take more time and stay a little bit longer.

Golden Stripe: Calm Yourself and Win

Experience slot gaming at its easiest and most uncomplicated here in casino slot Golden Stripe. Have a relaxing time when you spin the solitary reel and advance through the 7 golden levels of the paytable. Get increasing payouts as you move from one level to another. Loyal visitors stay for wins and leave with calm minds. Spin the reel now!

Go steampunk and retro in Steam Vault! Earn gems to get coins out of the steam-powered slot machine. Join the Fortune Miner and win the treasure of a lifetime! Experience innovative slots gaming with OneTouch games.