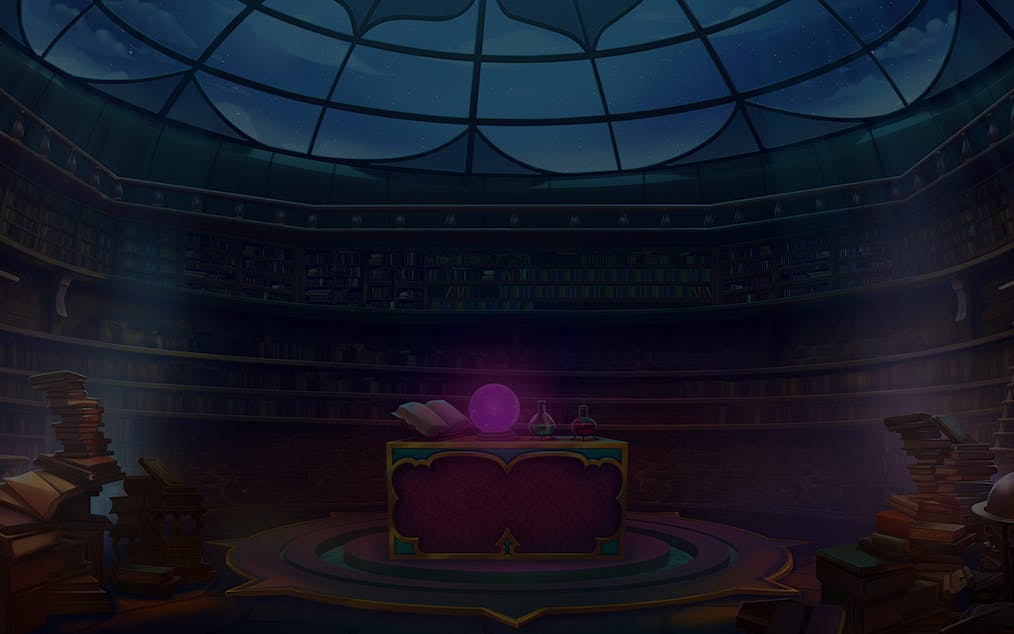 To become a great magician, one must first apprentice with a capable sorcerer who will hone your skills in spellcasting and alchemy. Join the man known only as The Mysterious Magician and uncover his secrets to help you gain magical rewards!

What is the RTP of Magician's Secrets?

Magician's Secrets from Pragmatic Play has an appealing RTP of 96.51%.

What is the volatility of Magician's Secrets?

The volatility of Magician's Secrets is high.

What is the max win available for Magician's Secrets?

What are the minimum and maximum bets on Magician's Secrets?

As the Magician’s apprentice, your first duty is to collect all the paying symbols to help the Master Magician cast successful spells. Keep an eye out for Wilds and Scatters, which will make the potions more potent with extra free spins!

Familiar symbols such as a Blue Diamond, Green Club, Red Heart, Pink Spade, and the addition of an Orange Shield represent the low-paying symbols.

Essential materials for a great magician such as Potion Bottles, Daggers, Goblets, Decorated Blades, and a Spellbook represent the high-paying symbols in the game.

The Wild is depicted by a mysterious-looking bearded man with his hand hovering over the word ‘wild’. It appears on all reels except for the first and can substitute for all symbols except scatters.

During the base game, wild symbols can expand to the entire reel randomly. If it expands, it will have a multiplier value attached to it from 2x to 10x.

Appearing as a magician’s glowing orb with the word ‘scatter’ written at the bottom is the Scatter symbol. It triggers the free spins feature and can also pay in any position.

The free spin feature is triggered by 3 or more Scatter symbols. Once triggered, you will have a choice between two types of free spins:

When you choose this feature, 10 free spins will be awarded. As the free round commences, all the wild symbols that land on reel 3 or 4 will expand to fill the whole reel. It will also trigger respins.

At every respin, the multiplier value of the expanding wild will increase by 1x and will be applied to all the wins that include it. Additionally, hitting 3 or more scatters retriggers the round with 10 more free spins. The game will continue until the respins run out.

The feature awards 8 free spins. Before the start of the round, a random paying symbol is chosen. Each time the chosen symbol lands on reels 2, 3, 4 or 5 during the feature, it transforms into wild.

All the wilds that appear and transform will remain sticky in their positions until the end of the round. When one or more reels are filled with sticky wilds in a vertical position, the game awards 3 more free spins.

Magician's Secrets: To see is to believe

Join the Magician and uncover all the secrets of sorcery to master the art of spellcasting and alchemy. Inside the Magician’s lair, you will find several spell books that will start you on your way to becoming a master magician. Be diligent in your apprenticeship so that the Magician rewards you with high rewards!

Magician's Secrets: Be the next best magician!

The Magician does not just teach anybody. He looks for innate magical abilities in a person before he decides to teach them the ways of sorcery. With your skills and by placing bets ranging from 10 to 100 credits, you’ll quickly be on your way to becoming a great magician.

Once you have finished your apprenticeship with the Magician, the next step is passing the test of the Mystic Chief to become a full-fledged magician yourself. Go over the contents of the Book of the Fallen to discover how others failed their attempts and use it as a guide to succeed.